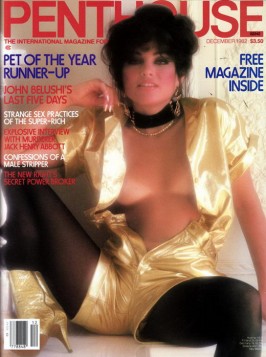 Join to vote for
Monique Gabr...
Join to add to
Favourites

Praises from members: This lovely model needs your favour

Beautiful, buxom and shapely knockout Monique Gabrielle added an ample, alluring and invigorating dose of smoldering sex appeal to a bunch of enjoyably down'n'dirty horror and exploitation pictures made throughout the 80s and 90s. The 5' 6" natural brunette was born as Katherine Gonzalez on July 30th, 1963 in Kansas City, Missouri and was raised in Denver, Colorado. Gabrielle made her acting debut at age five portraying an angel in a church Christmas play. She started modeling while still in high school, entered her first beauty pageant at age 17 (she won the title of Miss American Legion and went on to participate in several other pageants, modeling competitions and nightclub contests), and moved to California in 1980 right after she graduated from high school. Monique was the December 1982 "Penthouse" Pet of the Month. She had small roles in the mainstream features "Airplane II: The Sequel," "Night Shift," "Young Doctors in Love," "Flashdance," "Hard to Hold," and "Fear of a Black Hat." Gabrielle achieved her greatest enduring popularity as the enticing young woman who tries to seduce Tom Hanks in the uproariously raucous'n'raunchy "Bachelor Party." Her most memorable roles include a pathetic junkie snitch in the terrifically trashy babes-behind-bars classic "Chained Heat," the titular brazen and uninhibited sexual adventuress in the steamy "Emmanuelle V," a sweet princess and her evil twin in "Deathstalker II," a nude model in the funny sketch comedy "Amazon Women on the Moon," a gutsy lady cop in "Silk 2," feisty security chief Miss Poinsettia in the amusingly campy "The Return of Swamp Thing," and the nerdy, repressed Megan in the delightfully dippy "Evil Toons."